The Scholarship Committee is pleased to announce that the Military Officers Association of America (MOAA) Tampa Chapter is accepting applications to award scholarships of up to $2000.00 high school seniors who are planning to attend college or community college during the 2023-2024 school year and will be awarded at the May 2023 luncheon. The application deadline is April 15, 2023. 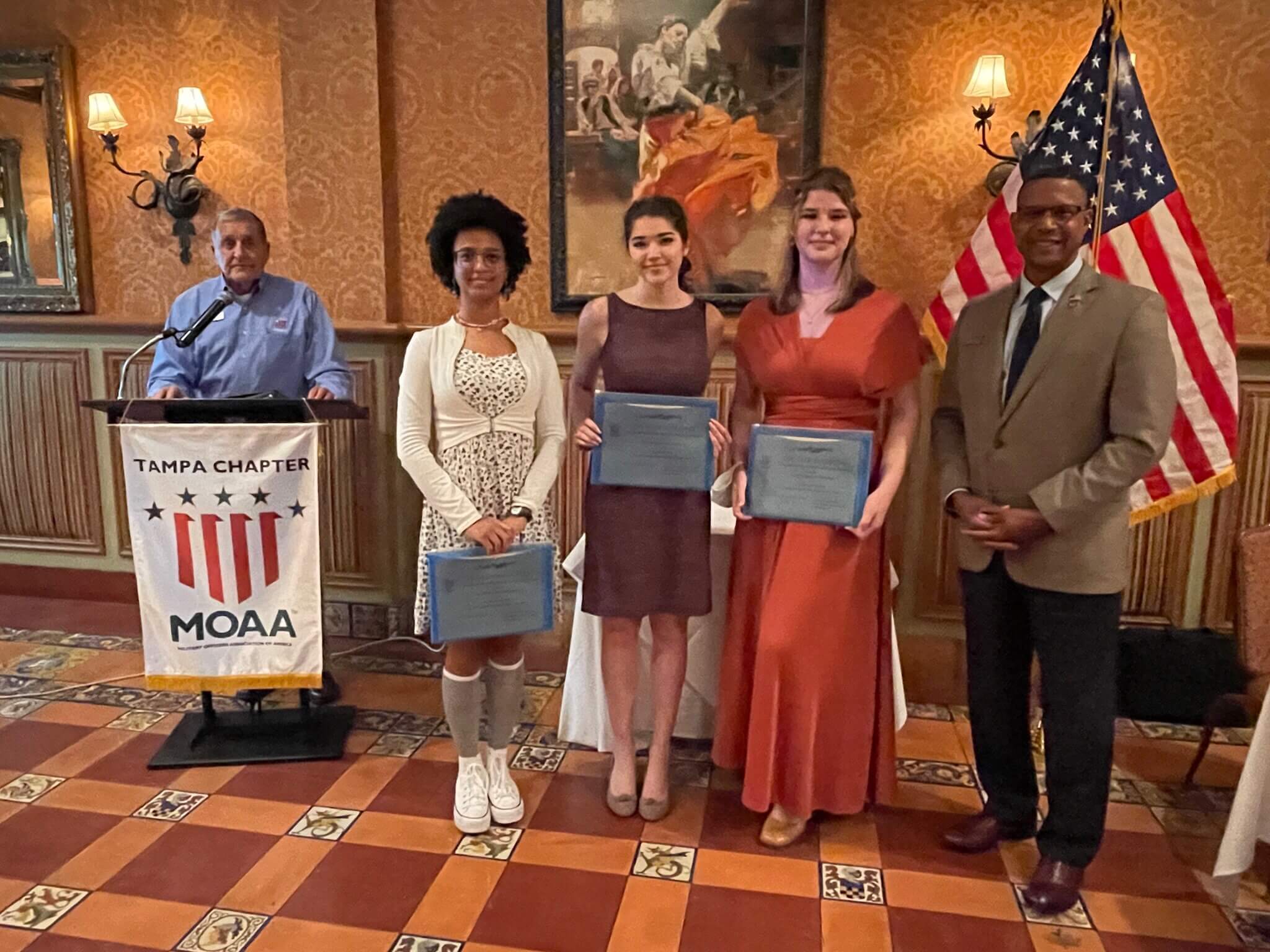 MOAA TAMPA AWARDS 2022 SCHOLARSHIPS AT THE MAY LUNCHEON

Congratulations to all the recipients of the MOAA Tampa 2022 Scholarship Awards held at the May Luncheon. Each recipient was clearly deserving of such an award by the MOAA Tampa Chapter. The awardees are Lauren Richard, Luke Austermehle, Eden Dalcourt and Emma Unger. Here are their accomplishments:

Lauren Richard will graduate from Wiregrass Ranch High School with an unweighted GPA of 3.7. She attained a CPA rating for choral performance for 4 consecutive

years and The State Thespians superior rating for musical performance for

two consecutive years. Her community service includes performances in several productions include acting in productions of: Rent, Legally Blond and Chicago. She

is also involved in climate issues as a member of Earth Uprising, Tampa Bay. Lauren is also the Co-founder of her High School Political Club. She will attend the University of South Florida as an English major and plans to pursue a career in acting. Lauren was sponsored by her grandmother, LTC Jeanne Richard and was accompanied by her mother Jennifer Richard.

Luke Austermehle will graduate from Pennridge High School, in Perkasie, Pennsylvania with a GPA of 3.55. He has earned honors or distinguished honors all four years of high school.

He is currently captain of the varsity track and field team. Luke is also a member the Future Business Leaders of America. His community activities include participation in Martin Luther King Jr Day activities, and volunteering at the Children’s Hospital of Philadelphia and at area nursing homes.

Luke will attend Bloomsburg University. His immediate aspiration is to continue his track career. His dream is to qualify for the U.S. Olympic track and field team. Luke

is sponsored by his grandfather, COL Bernard Lieving. Luke was unable to attend because of track & field commitments. COL Lieving accepted the award on his behalf.

Eden Dalcourt will graduate from Freedom HS with an unweighted GPA of 4.0. She received the National Leadership Award from the Military Order of the Purple Heart, named; a National College Board Advanced Placement Scholar, National Honor Society and selected; the Freedom High School Junior ROTC Cadet

of the year. Eden’s community activities include feeding the homeless

at Metropolitan Ministries, teaching middle school students as part of the Junior Achievement program, fund raising for Richards Run For Life and participating

in the Adopt a Road Program. She will attend the University of Florida and

hopes to pursue a career in Chemical Engineering with emphasis on the development of renewable energy. Eden was sponsored by her dad, COL Charles Dalcourt, and was accompanied by her parents COL Charles and Millie Dalcourt.

Emma Unger will graduate from Ridge Point HS in Missouri City, Texas with an unweighted GPA of 3.88. She is a National Merit Scholar. Her school activities center around Science and the Performing Arts. Her theater group put on up to 8 shows each year. She was her school’s Chemistry representative in the Texas State Science Bowl competition.

Her community activities include participation in Skate Therapy, a nonprofit organization the teaches ice skating to disabled children. She served as Secretary and is currently President of the Junior Board. She will attend the University of Texas as a pre-med student with hopes of becoming a clinical research physician specializing in autism. 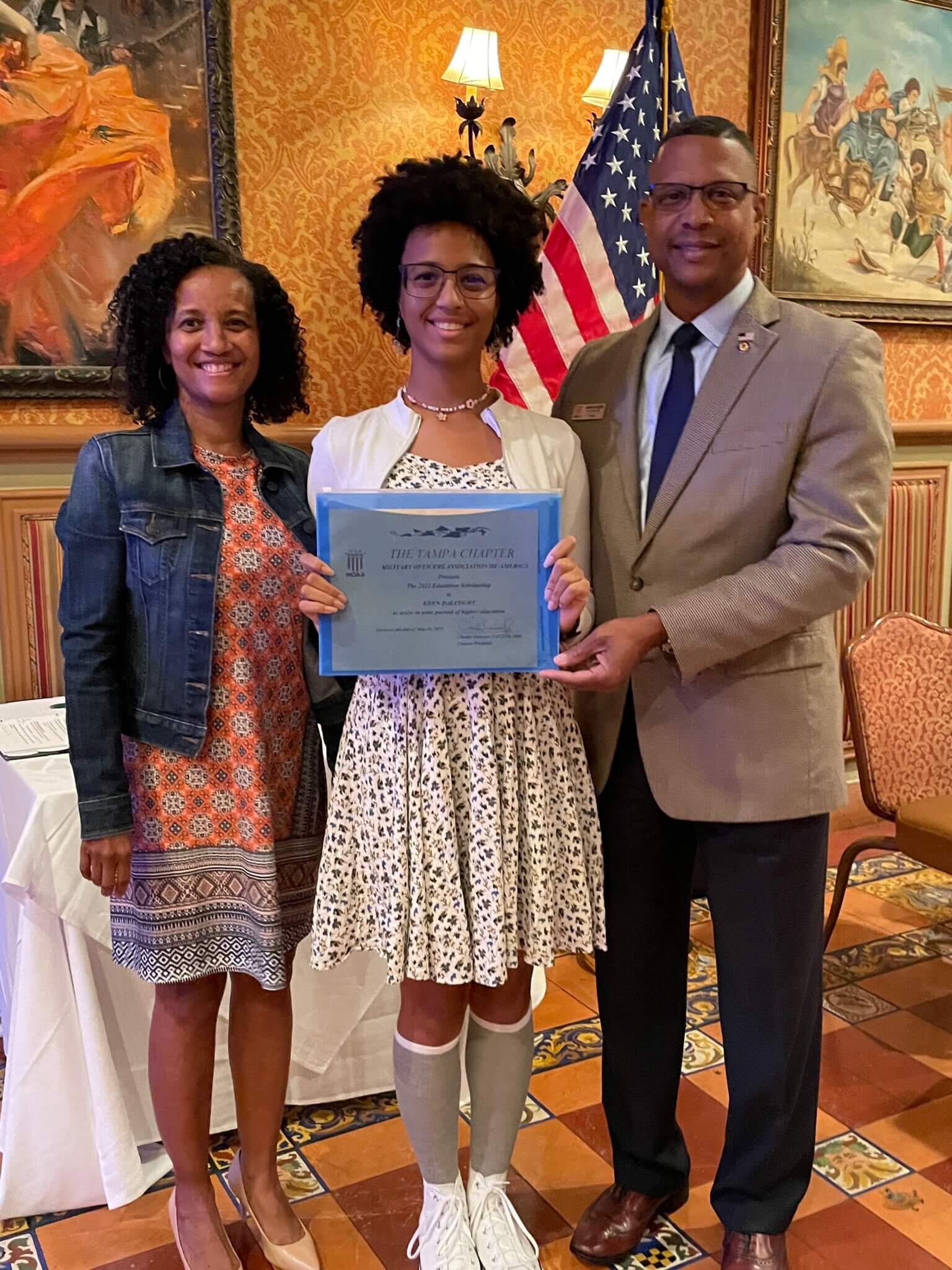 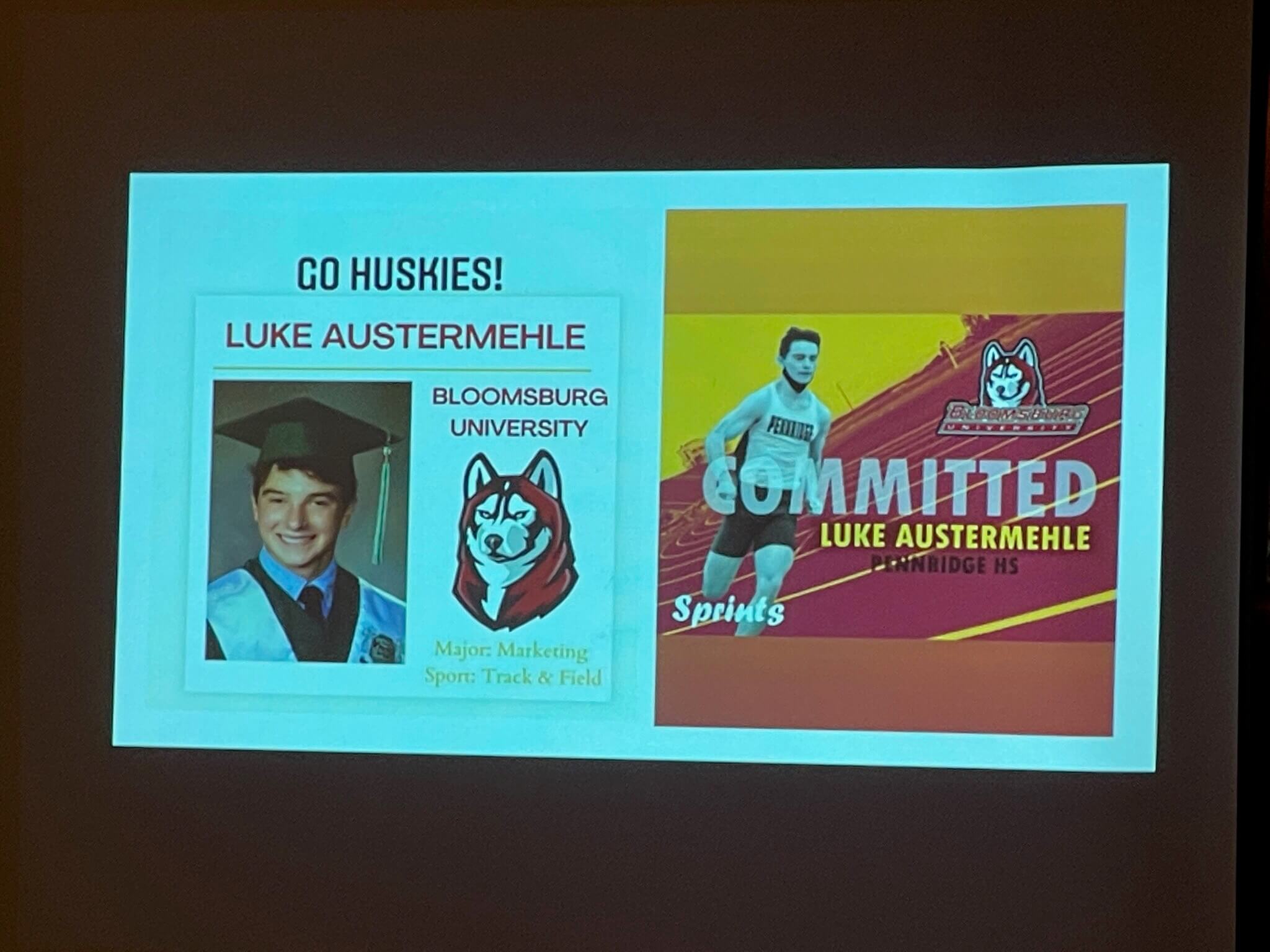 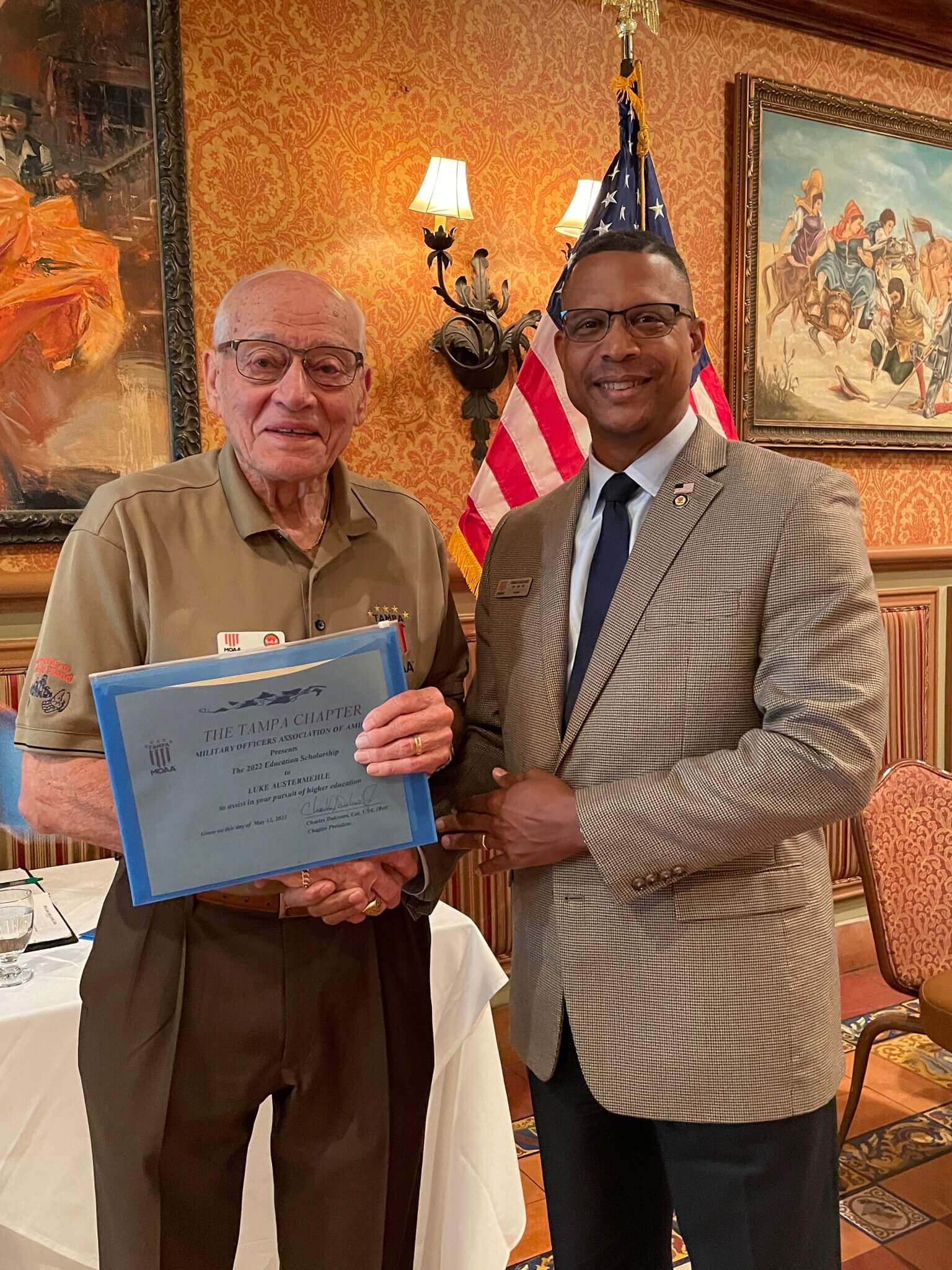 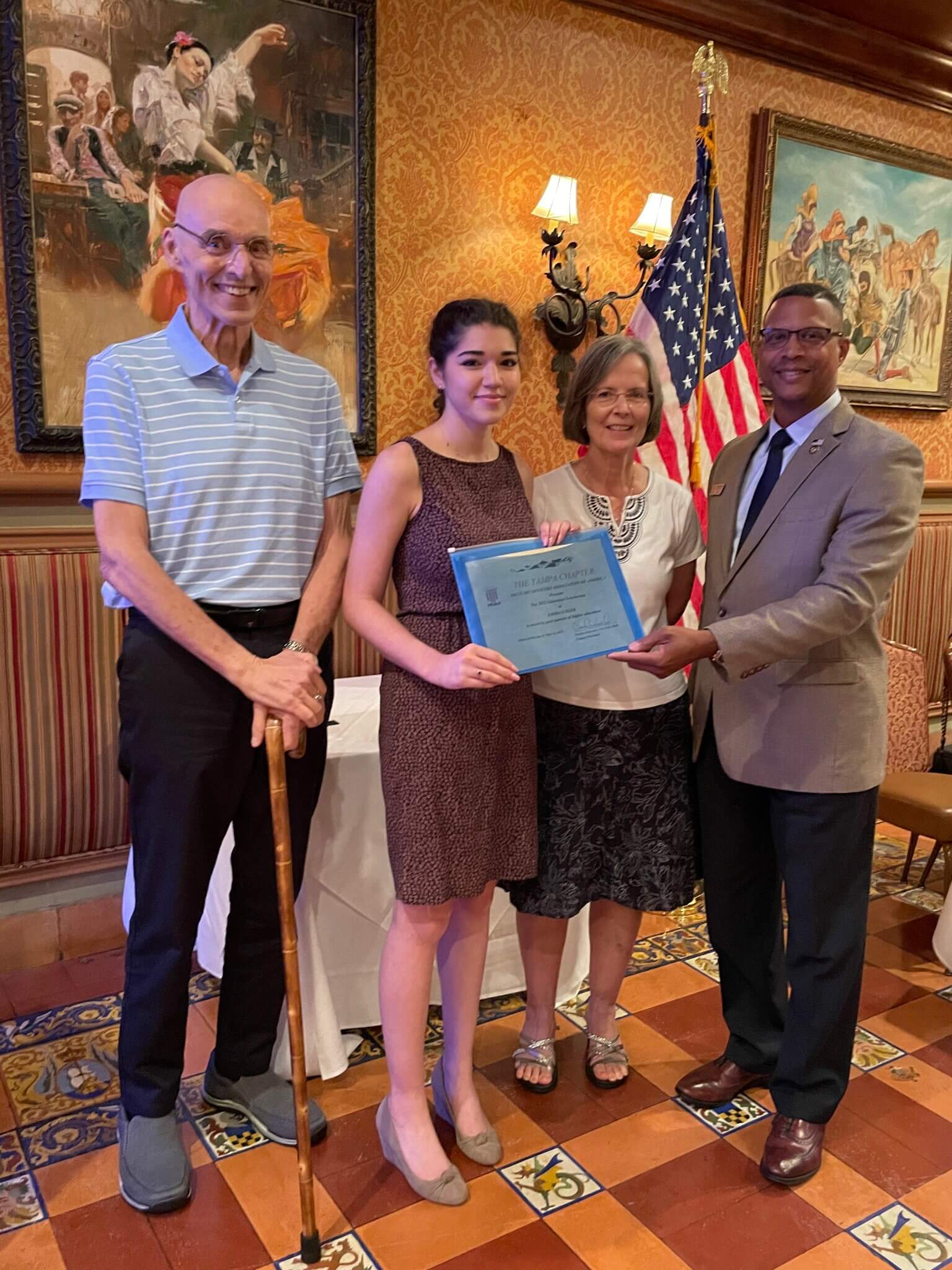 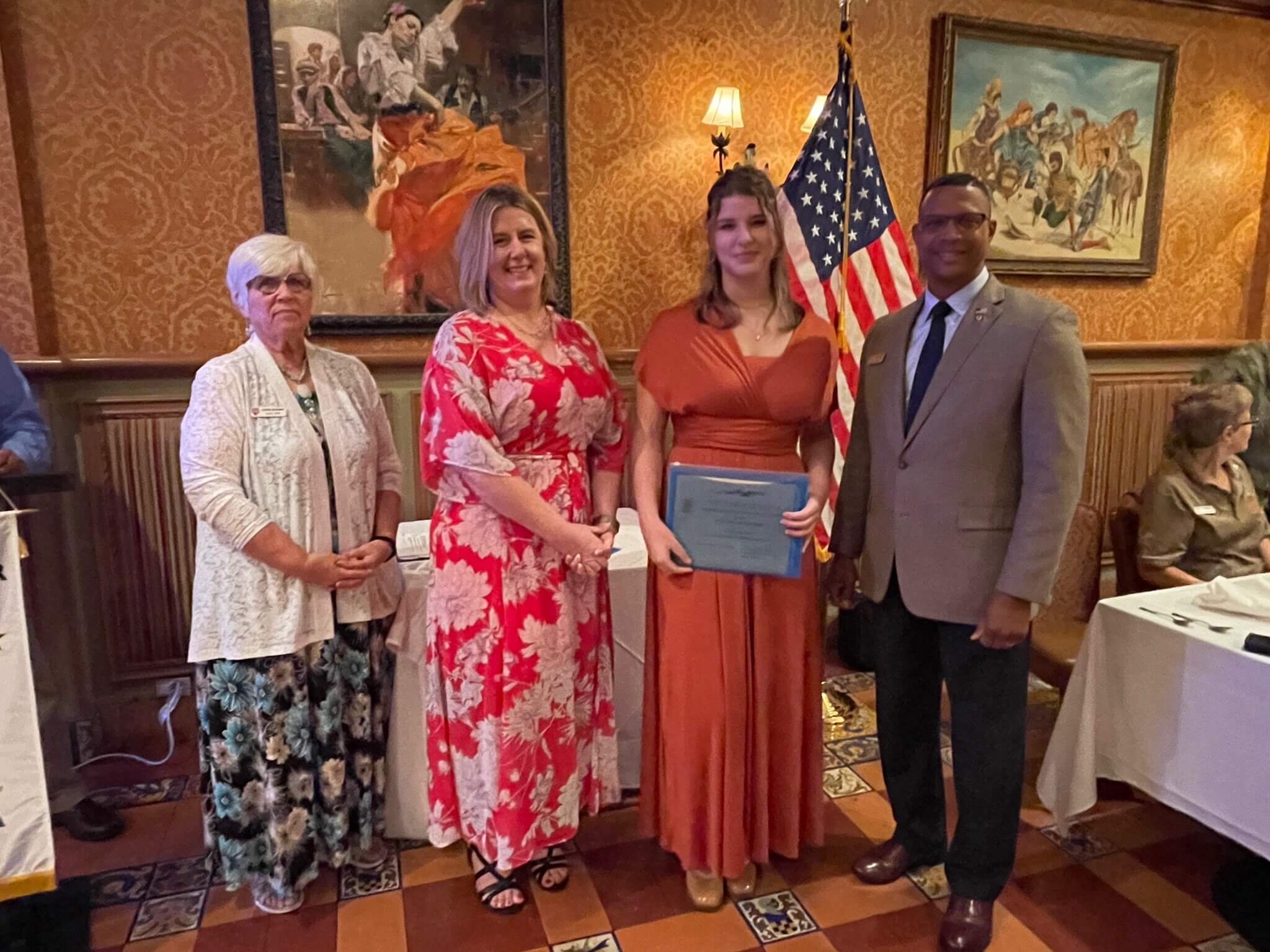